Welch, elected to the state House in 2013, steps into a government quagmire on Day One. Illinois is no stranger to financial crises, but after an economic upswing in 2019, the state is now saddled with a $4 billion budget deficit amid the Covid-19 pandemic, and a redistricting process where Illinois will likely lose one congressional seat.

But he also takes the gavel as state lawmakers pass criminal justice reforms prompted by the social unrest that swept across the country and Illinois last year after the killing of George Floyd in Minnesota — part of a sweeping "Black Agenda" he’s worked on with other members of the Legislative Black Caucus. The same day Welch was elected speaker, the state House passed a sweeping bill to end cash bail and eventually require all police officers to wear body cameras.

“Today will be the last time I talk about us as Democrats and Republicans," Welch said in a speech to lawmakers after becoming speaker. "I want to talk about us as being united. We are going to work together to be united." 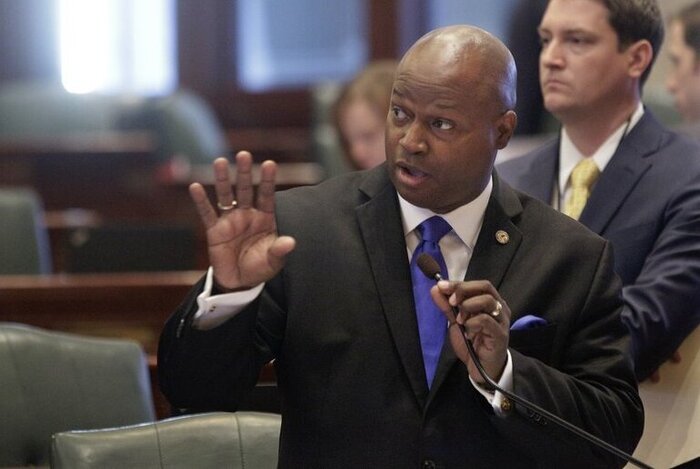 The speaker’s race had plenty of suspense. What started last year as a simmering legal and political soap opera — touched off by a corruption scandal around a local utility — turned into a rare opportunity to shed old leadership: Welch, who hails from the Chicago suburb of Hillside, practically cleared the field when he officially stepped into the race on Monday shortly after Madigan dropped out.

The outgoing speaker, who has wielded the gavel almost continuously since 1983, was gracious in the transfer of power.

“It is time for new leadership in the House,” Madigan said in a statement Wednesday. “As I look at the large and diverse Democratic majority we have built — full of young leaders ready to continue moving our state forward, strong women and people of color, and members representing all parts of our state — I am confident Illinois remains in good hands.”

Madigan had spent months working over the Democratic caucus, which controls the chamber, to secure the 60 votes needed to keep his job.

And he had plenty of leverage points: In addition to his power to determine what legislation moves and to set staffing for Democratic lawmakers, Madigan leads the state party. In that job, he doles out campaign funding under a machine system in which Democratic candidates try to “get on the program.”

But Madigan never recovered from an open rebellion within his caucus last fall, when 17 members — more than enough to deny him the necessary votes — announced plans to block him from another term.

Madigan’s supporters started pulling away last summer after he was implicated in a federal pay-to-play scheme involving Commonwealth Edison, a subsidiary of Exelon Corp. The public utility agreed to pay a $200 million fine and acknowledged it had tried to curry favor with Madigan by offering jobs and contracts to his allies in exchange for favorable legislation.

The veteran lawmaker has not been charged, but the investigation loomed particularly large after the November election, when Illinois Democrats lost congressional and state House seats and the governor’s signature progressive income tax referendum failed.

Sen. Dick Durbin, Illinois Gov. J.B. Pritzker and other Democrats lashed out that the ethical cloud had created distrust among constituents.

"We paid a heavy price for the speaker’s chairmanship of the Democratic Party," Durbin said on a local television program the day after last year’s election. He called on Madigan to step down from his leadership position of the state Democratic Party.

That didn’t happen, but a few Democrats in Madigan’s caucus tapped into the zeitgeist and went public saying they wouldn’t vote to reelect Madigan as speaker.

Republicans, meanwhile, pushed for an investigation into Madigan’s involvement in the federal probe. Welch ran the hearings and drew GOP criticism for slowing and stalling the process.

When Democratic lawmakers gathered on Sunday, Madigan’s deficit was larger than expected. He’d only mustered 51 votes while the remainder was split among other candidates, including two female legislators — another historic moment since no woman has ever run for House speaker in Illinois.

A master at counting votes for bills, Madigan didn’t have a clear path. He suspended his campaign for speaker on Monday but left the door open to jump back in should Democrats fail to give 60 votes to anyone else.

Within hours, Welch — a member of Madigan’s leadership team — jumped into the speaker race with the endorsement of the Black Caucus, a stronghold of 22 votes.

Then, Welch hit a snag. Tension ensued midway through Tuesday’s balloting when the Chicago Tribune published a story about allegations of Welch mistreating women from 2010 and earlier.

“I don’t take these allegations lightly," Rep. Anna Moeller said after the Tuesday vote. "But I was satisfied with Chris’ explanation of the events. … We work very hard here to pass legislation that protects women. And Chris has a great track record on women’s issues. And I believe he is sincere on supporting women’s issues.”

The story spread like wildfire, and observers outside of the General Assembly wondered if it would sink Welch’s standing with female lawmakers. It didn’t. By Wednesday morning, in a third ballot, Welch hit 55 votes — more than Madigan before he pulled out.

Behind closed doors, Welch and Rep. Jay Hoffman, the only challenge by now, met to talk about their stalemate and, within the hour, Welch was elected near unanimously by the Democrats and the full House vote with Republicans became a mere formality.