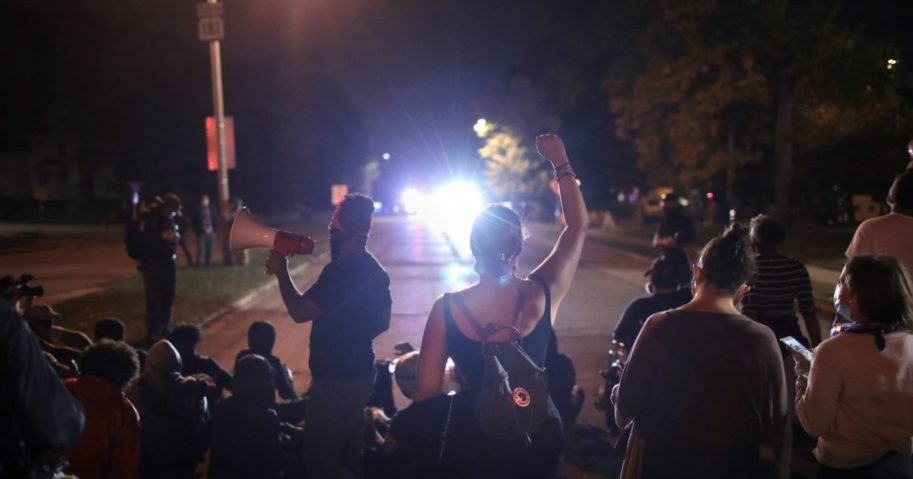 Police arrested 28 people during a third straight night of unrest over the decision not to charge a suburban Milwaukee police officer who fatally shot a black teen, authorities said Saturday.

About 100 people gathered outside City Hall on Friday past Wauwatosa’s 7 p.m. curfew and refused multiple orders to disperse, according to police.

Police said two of the arrests were for felonies, one was for a misdemeanor and 25 were for municipal citations.

Police said some of the people arrested were blocking traffic, others had tried to start fires, and one person had materials to start a fire, including lighter fluid.

Police said one person in the group posted a picture of himself with a handgun.

Protesters have gathered every day since prosecutors announced Wednesday that they would not charge officer Joseph Mensah in 17-year-old Alvin Cole’s death.

Mensah shot Cole after a foot chase outside a Wauwatosa mall in February.

About an hour after Friday’s curfew went into effect, law enforcement began advancing toward the crowd.

Windows were broken at a fitness center, police said.

One of the people arrested was driving one of three vehicles that had come to the Wauwatosa Police Department early Saturday.

The vehicle almost hit an officer, according to police. The driver got into a second vehicle, and police arrested the person after a short chase, authorities said.

“We can appreciate the anger and frustration that exists among those closely affected by recent events,” police said in a statement on Saturday.

RELATED: Rittenhouse Lawyers: Extraditing Teen to Wisconsin Would ‘Turn Him Over to the Mob’

A 7 p.m. curfew was to be in effect again on Saturday and Sunday nights. The National Guard is assisting local police.