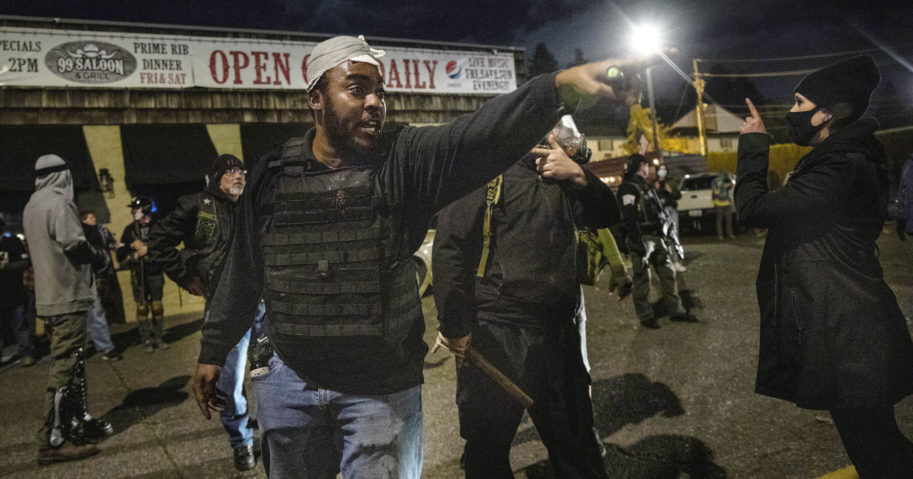 Tensions boiled over into unrest late Friday following a vigil for a black man shot and killed by law enforcement in a city near Portland, Oregon, in southwestern Washington state.

Family and friends of Kevin E. Peterson Jr., 21, say he was shot Thursday night in Hazel Dell, an unincorporated area of Vancouver, Washington. The city is about 12 miles north of Portland.

Hundreds of people gathered for the vigil on Friday evening. Nearby, tensions flared between left- and right-wing protesters.

Video showed two groups of people shouting at each other and some armed demonstrators gathered near a building they told reporters they were protecting.

The crowds ultimately dispersed near the vigil, but a group of hundreds of protesters later marched through downtown Vancouver.

Windows were shattered, flags were burned and federal agents in riot gear surrounded a building — warning that people trespassing on federal property would be subject to arrest.

Multiple videos showed two vehicles facing each other just after midnight on a downtown street. Two shots were heard, but reporters at the scene said it didn’t appear anyone was hit.

Authorities declared an unlawful assembly and ordered the crowds to disperse. At least one person appeared to have been detained, according to video posted online.

Clark County Sheriff Chuck Atkins referenced the Peterson family in remarks but did not confirm Peterson was the person who was killed.

“I can say that our agency is grieving as is the Peterson family and the community,” Atkins said.

“As the community grieves, I call for there to be a respectful and dignified observance of the loss of life in this matter. There is always the potential for misinformation, doubt and confusion — and there may be those who wish to sow seeds of doubt.”

The investigation has been referred to the Southwest Washington Independent Investigation Team, and the Camas Police Department is taking the lead, Atkins said.

Hazel Dell is a short drive north across the Columbia River from Portland, where protests and riots have played out nearly every night since George Floyd’s death in May.