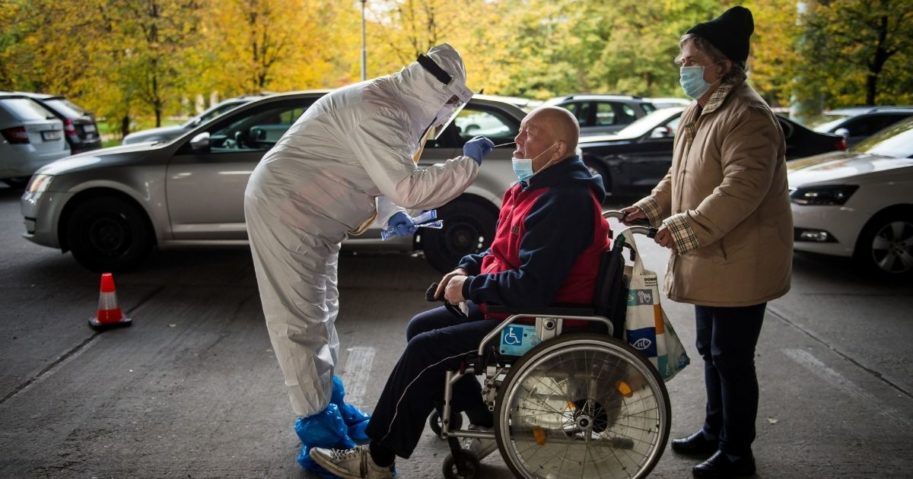 More than one million people were tested for the coronavirus in Slovakia in one day on Saturday.

An ambitious plan to test most residents of the eastern European country — which has 5.5 million total inhabitants — began Saturday with a massive mobilization of people, according to Reuters.

Those under the age of 10 were excused from being tested.

By the end of the day on Saturday, though, more than one million tests had been conducted.

The country’s leaders think that by rapidly testing every citizen in the country, they can mitigate the spread of the coronavirus.

Slovak Defense Minister Jaroslav Nad said at a media briefing that 3 million people could be tested by the end of Sunday.

More tests will be administered next week in the country.

Nad said, “We have clearly got to over 1 million — people’s interest continues.”

Meanwhile, Slovakia’s prime minister, Igor Matovic, said he hopes that identifying positive cases quickly can lead to the isolation of those individuals, which would prevent a wider lockdown.

Do you agree with Slovakia’s approach to testing most of its citizens?

The effort relies in part on a small army of public officials and other volunteers.

An estimated 40,000 health care workers, soldiers, police officers and others were conducting the tests at approximately 5,000 testing sites throughout the country.

The number of COVID-19 tests administered equates to nearly one-fifth of the country’s entire population, and the testing was described by Reuters as “voluntary.”

Still, those who did not voluntarily undergo testing were set to be forced by the government to go into a quarantine protocol.

That will prevent those who refrain from being tested from being allowed to go to work or attend school.

Slovakian President Zuzana Čaputová, however, has expressed concern that there are not enough health care workers to carry out the initiative as planned. She wants the government to reconsider the strict measures it has said will be imposed on those who do not get tested, The Slovak Spectator reported.

One man said he showed up for the test so his son would be permitted to go to school.

“I did not have much of a choice, but I did not think much about it,” Martin Janosik told Reuters at a testing location north of Slovakia’s capital city of Bratislava.

Janosik added, “It is also good for me and for my company, if I am healthy I can be there and take people around.”

Citing Slovak media, Reuters reported wait times for coronavirus tests Saturday were up to four hours in some areas.

Despite questions regarding antigen swab tests, which, according to to one study, are only around 70 percent accurate, government officials deemed the rapid mobilization to test citizens a worthwhile exercise.

As of noon local time, Saturday’s tests had identified 7,947 positive cases of the coronavirus, according to Reuters.

A relatively small number of people, 219, have died from the coronavirus in Slovakia.