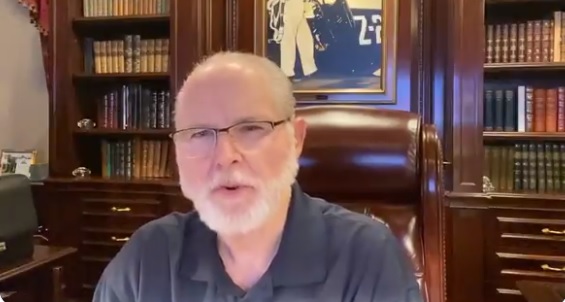 Rush Limbaugh has been delivering a consistent, convincing conservative message to Americans for more than 30 years — but his pitch Monday night was in a class by itself.

In a video posted to his Twitter account, shot in his home library, Limbaugh was no doubt showing the physical effects of his ongoing battle with lung cancer.

But he was also showing that his mental acuity, and his passionate commitment to the conservative cause, were as present as ever.

The fact that it took place minutes before the Supreme Court confirmation of now-Justice Amy Coney Barrett — a seminal event in the country’s legal history — only added to the importance of Limbaugh’s words.

TRENDING: With Only 9 Days To Go Before Election, Biden Calls Another Lid While Trump Is Securing Peace in the Middle East

“Hey, folks, sitting here in the library getting ready to watch the confirmation vote — Amy Coney Barret, Supreme Court — and it just reminds me: Folks, we don’t have a choice in this election,” Limbaugh said.

“It’s got to be Donald Trump.”

Every American election boils down to divergent views of the country’s future, of course. That’s what living in a democratic republic is all about. But the 2020 election is different, Limbaugh said.

“We’re not going to have the kind of country everybody thinks we’re going to have. This is not the old ‘Republicans versus Democrats,’ where we all have the same objectives, just different philosophies on how to get there.

“They do not have those objectives anymore. Their purpose is to erase the Constitution, start over rewriting it, eliminating the concept of ‘the citizen has rights which prevail over government.’

“It’s serious, and it’s scary, and we don’t have a choice. You have to get out there and vote Trump.”

As usual, Limbaugh’s point was clear: The Democratic Party as currently constituted is a different organism from its past incarnations.

There was a time in living memory when Democrats were merely foolishly, dangerously wrong-headed about their approach to issues. But were still recognizably American.

RELATED: Trump Campaign Trolls Reporters by Forcing Them To Use Genius Phrase if They Wanted on His WiFi Network

On the domestic front, they believed that government should usurp the role of the nuclear family — and the nation has the history of Lyndon Johnson’s disastrously expensive Great Society and other failures to show for it.

On the foreign relations front, they believed in playing pattycake with the Soviet Union and other communist dictatorships and ended up being proven wrong when Presidents Ronald Reagan and George H.W. Bush won the Cold War in a victory for Western values that has never been fully appreciated.

Those were the actions of foolish people, of course, the role Democrats have played in American politics for generations, but they were not acts of malice aimed at the heart of the American structure.

The fact that the Democratic nominee, Joe Biden, has been at best ambiguous about progressive violence in the streets and distressingly deceptive about his support for “packing” the Supreme Court gives added credence to Limbaugh’s words.

The rot in the Democratic Party is not confined to its far-left wing (or the likes of Bernie Sanders and Alexandria Ocasio-Cortez).

It runs through the heart of the party, from its congressional leadership that tried to impeach the president — Nancy Pelosi, Adam Schiff — up to its candidate for president.

“Their purpose is to erase the Constitution, start over rewriting it, eliminating the concept of ‘the citizen has rights which prevail over government,’” Limbaugh said.

That’s the principle at the core of the American exceptionalism that is, quite literally, the envy of the world.

And it’s what Democrats are bent on destroying.

“It’s got to be Trump” is what Limbaugh said.

“We’ve got to be America” is what came through, loud and clear.

UK plans ‘Christmas bubbles’ for families to celebrate amid COVID-19

Indian man comes home after being declared dead from COVID-19