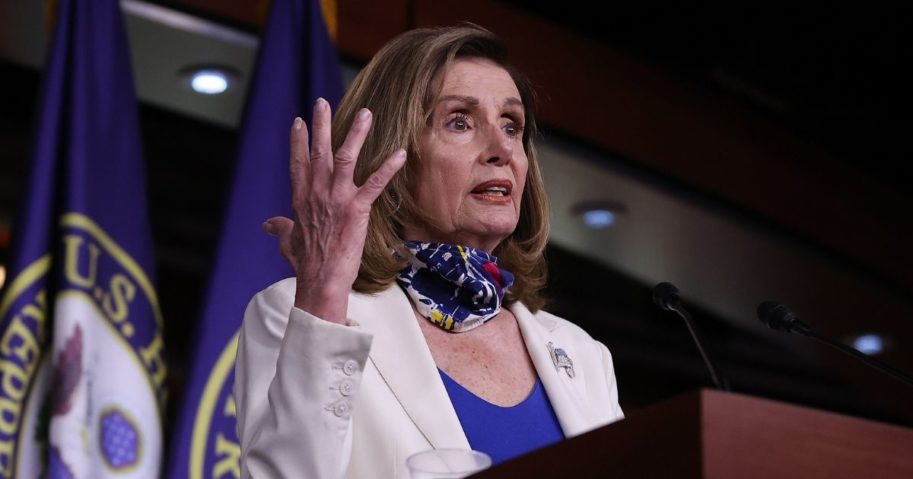 House Speaker Nancy Pelosi turned down an offer from the White House regarding a new coronavirus stimulus package on Saturday.

The California Democrat referred to the $1.8 trillion offer as “insufficient.”

Democrats have sought for months to pass $2.2 trillion or more in new aid, though critics say they are seeking economic bailout funds for Democrat-run states, as well as other wishlist items for the party.

Talks between the two sides have stalled since May, and on Tuesday, President Donald Trump ordered his representatives to stop negotiating with Pelosi and House Democrats until after the election, Politico reported.

Later in the week, those with hopes that an agreement could be reached were pleased when Trump ordered talks to resume, this time with the White House willing to spend more.

But those hopes were dashed Saturday by Pelosi, who rejected the $1.8 trillion offer from the White House, which had Trump’s approval. Pelosi is privately seeking $2.4 trillion, the Washington Examiner reported, though House Democrats passed a $2.2 trillion package earlier this month.

The speaker complained when writing to House Democrats that the Trump administration offer fell short by $200 billion with regard to federal unemployment insurance alone.

Pelosi and Democrats want the return of $600 weekly supplemental benefits for unemployed workers from the CARES Act, which was passed in March.

Do you think Republicans should stop negations with Pelosi?

Those benefits were criticized as being a motivator for some people to remain unemployed, as many workers earned more for being out of work than they would have if they had continued working or had returned to work.

In addition to seeking the supplemental unemployment benefits, Democrats also want more money for child care and a number of tax credits.

Claiming that “the Trump proposal is insufficient,” Pelosi wrote Saturday, “Despite these unaddressed concerns, I remain hopeful that yesterday’s developments will move us closer to an agreement on a relief package that addresses the health and economic crisis facing America’s families.”

Pelosi added, “At this point, we still have disagreement on many priorities, and Democrats are awaiting language from the Administration on several provisions as the negotiations on the overall funding amount continue.”

Pelosi to Hse Dems on coronavirus talks: The Trump proposal is insufficient in meeting families’ needs, in stark contrast to the Heroes Act, which secured tens of billions for direct relief and refundable credits.

RELATED: Pelosi Announces Bill To Enable Congress To Remove the President from Office

“With over 213,000 Americans tragically having died, nearly 7.7 million having been infected and millions having lost jobs and income security, it is long overdue for Republicans to get serious and work with us to defeat this crisis.”

CNN reported that some Republicans expressed their displeasure with the $1.8 trillion offer from the White House over its price tag during a conference call Saturday with White House Chief of Staff Mark Meadows and Treasury Secretary Steven Mnuchin, who has been negotiating with Pelosi.

Considering the $1.8 trillion plan reportedly had little support from Senate Republicans on the call, it’s unlikely any higher offer would receive any more enthusiasm, so it appears talks are now at a stalemate.

In May, House Democrats passed the $3 trillion HEROES Act, which called for stimulus payments to many illegal immigrants and other items that critics said were unrelated to the struggling of American businesses and workers amid the pandemic.

That bill was of course dead on arrival in the GOP-controlled Senate.

Congressional Republicans are seeking to spend no more than $1 trillion, with Senate Republicans drawing a line in the sand at any bill that costs more than $500 billion, according to CNN.

For now, it appears unlikely that a deal can be reached before the election, if at all.